Hi pirates ,
we need your help.

I don't know, if you already noticed it, but the EU is going to reform copyright soon. In this context the EU is asking all people, companies, organizations in the EU: "How copyright should be changed?"

That's really a very precious opportunity to have influence on EU copyright; and that for 2 reasons:
1. The result of this survey is the foundation of future steps of the EU in this area.
2. Probably the next time when we will get asked to copyright will be only in 10 years.

EVERYBODY within the EU is asked and especially we as civil society should participate in this, as payed industry lobbyists definitely will participate and hope, that they won't get outvoted by the population !

The problem regarding this issue is, that in disfavor of civil society the survey is inaccessible in multiple ways. As a reaction on this austrian and german pirates worked out and published a website, which makes it a lot easier to participate in this survey: http://copywrongs.eu/

This website makes it possible to answer this survey in just 15 minutes, if one makes it short.

The survey is open til the 5th of February.

And this is where you come into play:
We URGENTLY need people, who contribute to spreading copywrongs.eu in any possible way (the more efficient and effective, the better) !

If you grab and continue any stuff there, please document this in the
pad, so that work won't get done redundantly.

DO YOU NEED MORE INFO?!?!
Find us on IRC: Freenode, #copywrongs

- statistics - http://www.alexa.com/siteinfo/copywrongs.eu :
-- UK and Austria clearly moved up a gear the last couple of days
-- someone obviously spreads the link to copywrings.eu by single uploads on thepiratebay.se
-- most of our visitors (every third visitor) come from kinox.to - that's a criminalized online streaming site for movies, which links at copywrongs.eu from their main page
-- Global alexa rank 604,051

- important strategic note:
-- this friday is the last day, when it makes sence to incorporate copyright-critical non-end-users like NGOs, ISPs, libraries, companies, costumer protection associations, etc. !
The reason for this is, that such actors are not that flexible in replying input from outside than a private person; organizations have
longer internal process structures and thus need more time. So, consider this and make use of this last opportunity by focussing on such actors on friday.

addition to status-update regarding spreading - 01.30.2014:
-- the wicked czech pirates created and set up huge copywrongs.eu-billboards in real life ! Check it out: 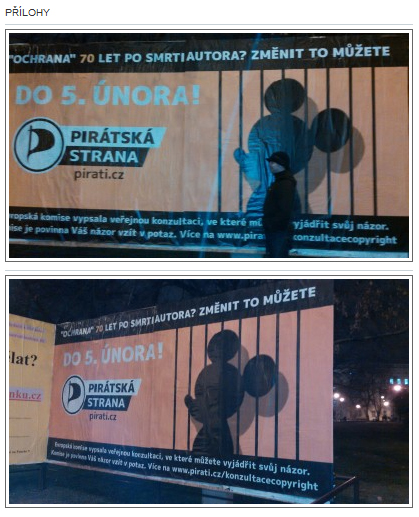 - important strategic note:
-- this friday is the last day, when it makes sence to incorporate copyright-critical non-end-users like NGOs, ISPs, libraries, companies, costumer protection associations, etc. !
The reason for this is, that such actors are not that flexible in replying input from outside than a private person; organizations have
longer internal process structures and thus need more time. So, consider this and make use of this last opportunity by focussing on such actors on friday.

- spreading actions:
-- the dutch pirates added the link to their monthly newsletter to prompt people to fill out the questionaire
-- more threads started on message boards
-- more copyright-critical non-end-users incorporated

- important strategic note:
The day before yesterday the european commission postponed the deadline by 1 month, so
we have 1 more month time to reply; new deadline is the 5th of March

Be sure that the european commission didn't do this because of spontaneously discovered democratic charity !
Amelia assumes it's also to get more rightsholder mobilisation. collecting agencies now urging members to respond.
So, we see 2 things here:
Obviously we had some effect with our copywrongs-initiative.
It's very important, that we promote copywrongs.eu even more !
Look in the spreading pad - https://piratenpad.de/p/spread-copywrongsEU - there's work to be done and there are not enough pirates
doing it. That's why in the pad you only find entries of spreading actions of the czech, swedish, austrian, german and dutch pirates ! But we're 28 pirate parties in the EU !
What we must acchieve is, that in each one of the 28 EU member states there are at least 2 pirates, who are constantly and seriously working on promotion of copywrongs.eu
based on the structure of the spread pad - https://piratenpad.de/p/spread-copywrongsEU - and documenting every action there...

1. go in the spreading pad - https://piratenpad.de/p/spread-copywrongsEU

4. Do you find a web banner set in the language, which is spoken the most in your country, in the spreading pad - https://piratenpad.de/p/spread-copywrongsEU ?
If yes, then go to step 5, if no, then create one and post it in the spreading pad; here is the editable web template for it: https://wiki.piratenpartei.de/wiki/imag ... banner.zip
Of course, if you want, you can create a totally new one; here's an inspiration for this http://i.imgur.com/WLLlk6i.png - it says "vote on copyright" in the header and as you can see,
it's designed a bit different... (no glow, calmer background)

7. Head for criminalized filesharing and streaming websites (the bigger the web site the better) !
You all know them - the places where you can see the newest cinema movies for free,
the places where you get the link to the download of the movie/software/music album/ebook/etc. you are looking for
The Cyberlockers, the torrent indexes, the file meta-seach-engines, etc. GO FOR IT !
Try to make these platforms place one of our copywrongs-web banners on their main site and link to copywrongs.eu with it !
Befor almost 2 weeks in Germany we had a great success with this approach; we've contacted the team behind kinox.to via web contact formular
and asked them to support distribution of copywrongs.eu by a web banner, and they did so: http://kinox.to/
kinox.to is a criminalized movie streaming site in german, which has at least 1 million visitors daily !
You can do this too ! Here's a cover letter template in english for it, which you can translate if necessary - https://piratenpad.de/p/spread-copywron ... eslider#59 - like everything you can find this link in the spread pad !

9. Send a topic suggestion to newspapers and other medias refering on youcan.fixcopyright.eu and the postponed deadline of the EU copyright consultation !

Here's the latest promotion status update of our copywrongs initiative - http://www.pp-international.net/phpBB3/ ... 686#p49686
As you can see, a lot happened; exciting times !

We got competition, so now we need to shift up a gear. Let's do so by incorporating all european pirate parties and pirate parties, who speak official EU languages, in our copywrongs initiative.


- statistics - no change yet; probably in 2 days there will :
-- Latest web statistics of copywrongs.eu: http://www.similarweb.com/website/copywrongs.eu
-- Latest web statistics of youcan.fixcopyright.eu: http://www.similarweb.com/website/youca ... pyright.eu
-- According to latest VG Bild-Kunst (collecting society picture - art) newsletter the european commission received clearly more than 10.000 contributions so far
--- where THE FUCK do they know this ?! 0_ò'' ...


- important strategic note:
-- TODAY (26.02.2014) is the LAST DAY when it makes sence to head for non end-user actors, because organizations need at least 7 days to respond on anything !
--- so if you haven't incorporated non end-user actors yet - and looking at the documentation it seems so - then do so ! This is the most sensible spreading approach you can do today !
---- I've created a template for you, so that you have minimal work for contacting all such actors - here: https://piratenpad.de/p/spread-copywron ... eslider#24 ; I hope that you can cope with the language, try using google translate http://translate.google.com - don't forget to individualize the template (names, etc.)
---- as you can see in the spread pad - https://piratenpad.de/p/spread-copywrongsEU - from lines 546 to 580, in germany and austria already a broad spectrum of copyright critical non end-user actors is incorporated; take it as an inspiration
----- who all got incorporated in germany and austria:
------ association of internet providers / internet economy
------ net politics NGOs
------ association of education and science
------ teacher associations
------ librarian association
------ consumer protection association
------ Computer gamer association
------ Hacker association
------ association of people who enjoy anime culture
------ parents association
------ device producer association
------ judges
------ philosophers
-- spreading actions of the rightholders:
--- they're briefing their filter bubble via newsletters and in this context link to the youcan.fixcopyright.eu clone, they have created and where all of our hints are removed
--- german collective society GEMA spreaded pre-filled questionaires of the EU copyright consultation on their last general assembly
-- tommorrow up to and including the upcoming weekend you should go for quantity distribution once again, meaning opening threads in
message boards - the bigger the message boards, the better; trying to land on streaming sites; etc. - well and after the weekend it's really
time to sit down and make one's own contribution, if one haven't done yet


-- funny shit:
--- According to latest VG Bild-Kunst (collecting society picture - art) newsletter this collectice society take into account to contest the validity of the EU copyright consultation because they fear that the result of the EU copyright consultation won't be in their interest: http://pastebin.com/KvME63CB - https://twitter.com/CopyWrongs/status/4 ... 8910940160 - ain't that hilarious ?! xD I was laughing my ass off, when I read it for the first time...


Please go into the spread pad and work there ! >>> https://piratenpad.de/p/spread-copywrongsEU
7 days left.